After being injured playing baseball, Jim Reeves went to work for KGRI, a small radio station in Henderson, Texas in latter 1947. With the exception of a brief hiatus to sell insurance for the National Life Insurance Co. (which, ironically, owned WSM, the Grand Ole Opry's flagship station), Reeves remained at KGRI until the end of January 1952. (Below is a photo of a "microphone flag" that had been attached to an RCA ribbon Shure 44 Electrovoice mic used at the station). 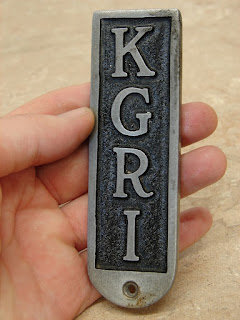 KGRI was located in a ranch-style house (nicknamed "the little red barn"), which sat atop a small hill near a big curve on the winding Southwood Road (now 102 Fair Park Drive), off U.S. 79 in Southwest Henderson. 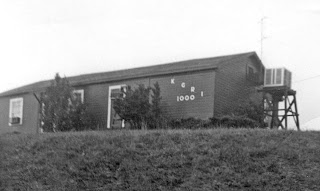 During that time, the Reeveses socialized with Jim's colleagues from the radio station. In those more innocent times, people used to have "house parties." They'd either play records on a phonograph, or tune in the radio and dance. It was all good, clean fun.

This home movie, which is courtesy of Stan Jeffus, shows Jim and Mary at the party. The film was shot at the Jeffus home around Christmas in 1948. Stan's father, George, worked as an engineer who helped put KGRI on the air. On Saturdays Stan sometimes went with his dad to the station, where more than once he saw Jim sweeping up the place.

When the movie begins, if you look closely you can see Jim and Mary sitting on the far side of the room with the window behind them. Soon Mary jumps up to dance with Jeff Ledbetter, while Jim sits and watches. Jeff was part of the little group that included Reeves and Al Courtney, who had a 15 minute show on the station on which they performed (in addition to their announcing duties). And, as Tillman Franks (who was Johnny Horton's manager) told me, Jeff did a lot to help Jim in his early singing career, acting as a sort of ad hoc manager in the beginning.

The man with the pipe is Lynn Roy of KGRI, and you see him dancing with his wife, Nell, and daughter Dianne. The Roys also had a big home on nearby Lake Cherokee. Dianne told me "we had a house in town and a house on the lake and they would come out and spend weekends on the lake. We never went to Jim and Mary's because they lived in a boarding house. They went with us different places." (I have a photo in my book, "Jim Reeves: His Untold Story," of the couples across from the beach in Galveston, Texas).

As the dance proceeds, you also catch a glimpse of Jim and Mary swinging in the background. Finally Jim walks across the room to talk with Mr. Ledbetter.

It looks like a happy time was had by all. Little did anyone know that some day Mr. Reeves would be an international singing star, selling millions of recordings, and being loved by generations of fans.

Sadly, after Jim died, the KGRI building was destroyed by fire. A lot of historic materials had been stored in the attic, including rare recordings by Jim, and they were lost in the blaze.