A CANDID TALK WITH MARY

During the many years I worked on "Jim Reeves: His Untold Story," a few cynical Reeves fans were sure I was never going to publish a book and they were very unrestrained in expressing their skepticism. A guy in the U.K. named Peter Atkinson — who has been publicly attacking me for over 16 years (!) — repeatedly posted the slander on the internet that I was just using the ruse of writing a book so as to con people out of their valuable Reeves artifacts and thereby add to my supposed collection! Various crazies also claimed that not only was I not a friend of Mary Reeves, I had never even met her. (Which begs the question: how would they know?) I was publicly challenged to produce evidence that I knew Mary and it was said that people close to her had never heard of me. I attributed these bizarre statements to jealousy on the part of the accusers. 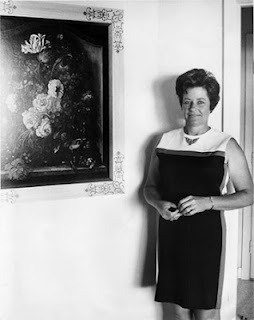 As I explained in the Foreword of my book, I knew Mary for 33 years, from the time I was 13 until she passed away in 1999. It is no exaggeration to say that I thought of her in some ways as a mentor. I visited the Reeves home in Madison, Tenn., and spent time with Mary both in Tennessee and Iowa, exchanged numerous phone calls with her and countless letters. So unlike scores of fans around the world who can claim to have met her, I'm not talking about merely having a brief encounter with Mrs. Reeves during a "meet and greet," or simply getting a card from her at Christmas. I am referring instead to lengthy, very detailed conversations with Jim's widow that sometimes went on for many hours over the course of several days at a time — morning, noon and night — as well as long letters that she would even type herself. I am not sure exactly what made Mary so receptive to my contacts with her, except she could tell that I was a very dedicated fan who was quite analytical. She told me one time that she enjoyed — and found useful — my honest feedback (pro or con) on Jim's music and what she was doing to promote it.

Here are excerpts from a conversation I had with Mary on the telephone in 1991 that I thought might be of interest to fans. Like many tapes I made of my conversations with her over the years, it was recorded strictly for my private enjoyment and for no other reason than just to preserve those memories. At the time, I never really had any serious intention of writing a book. (That came later). 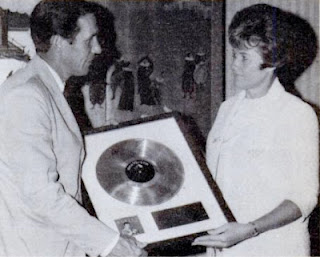 (The photo at left was taken in 1966 when I first became acquainted with Mrs. Reeves and it shows Chet Atkins giving her a gold record for "The Best of Jim Reeves" LP).

I feel certain that when you listen to a few excerpts from our conversation (posted below), you will quickly discern from Mary's demeanor that she and I were a couple of old friends who could speak candidly to each other, and who were able to pick up where we left off. You will hear Mary make comments unlike what she would ever have uttered in her formal public interviews, and you will also garner a wonderful insight into her personality, including her easy laugh that close friends so enjoyed about her.

I had mixed emotions when listening to this tape again after so many years, because it reminded me of how exasperated Mary was with having been shut out by BMG, the new German owners of RCA. The label didn't appreciate Jim Reeves' catalog and disregarded Mary's input on how to manage it. Their theory was that they could make money simply by re-packaging the same old tracks ad nauseum — so why bother to put out anything new? It is a strategy that, sad to say, Sony still follows. Fans are blamable for this to a large extent because they keep buying the retreads despite the lack of new material. This phenomenon puzzled Mary as it does me today.

I began by asking Mary about some TV commercials I had been seeing for a Jim Reeves collection. (I was not as well informed as to the source of this video at that time). Then (after an edit), I asked her whether or not she liked record labels like Bear Family releasing alternate takes and she said she did not, adding "it pisses me off!" Mary also complained about the incompetence of RCA/BMG and a "joker" who had handled the release of a CD called "Four Walls: The Legend Begins," and how she told him to "go to hell." She commented the cover painting of Jim looked more like Gov. [Jimmy] Davis (whose big hit was "You Are My Sunshine").

Mary commented that the record label people were "so dumb it's unbelievable." We shared the view that Garth Brooks was short on talent, which was especially paradoxical since Garth ended up being given the "Jim Reeves International Award" by the Academy of Country Music just three years later. Mary described her work on what was to become the "Golden Memories and Silver Tears" video of some of Jim's TV performances. (Ironically, my company has just released a new DVD called "The Great Jim Reeves Anthology 2014 DVD" that features 30 live video performances by Jim).

Click to play Track #2:
The ultimate irony is when I asked Mary why she had never written a book! This was not the only time we discussed the possibility of my helping her write one. In fact, we talked about this in depth as late as 1995, shortly before she became ill. I asked her about the Christmas radio show Jim had done, and the Nashville symphony concert, which Mrs. Reeves had promised for years to release. (By a strange twist of fate, I later scored the world premier of these rarities on my own indie label, VoiceMasters). I suggested she contact Carnegie Hall to see if any video or sound recordings existed of the time Jim Reeves performed there with other Opry stars in November 1961, but I subsequently found out in the course of my book research that the musicians union representing the Opry performers specifically forbade Carnegie Hall from making any such recordings. Such a move by the union was short-sighted and moronic, given the historic nature of this occasion.

In the final portion of our chat, Mary expresses her frustration over the lack of media coverage. But she was grateful for any attention paid to Jim.

Below is a favorite "new" photo of Mary Reeves taken during the 1958 annual deejay convention in late fall in Nashville. I like the shot and she sure looks pretty, doesn't she? 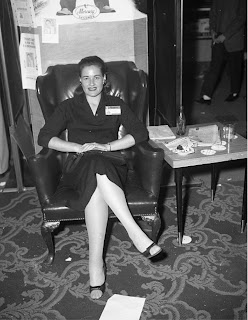