In my book, "Jim Reeves: His Untold Story," I describe the homes that Jim lived in over the years, from the  rustic shanty where he was born in 1923 in East Texas to the rambling brick home he lived in at the time of his death in 1964. I also have pictures of some of these houses.

From 1958 on, Jim and Mary Reeves lived in Madison, Tennessee, a few miles northeast of Nashville. I interviewed the home builder, Charles Rhoten, who described in sometimes humorous detail dealing with the Reeveses during the construction of their residence. 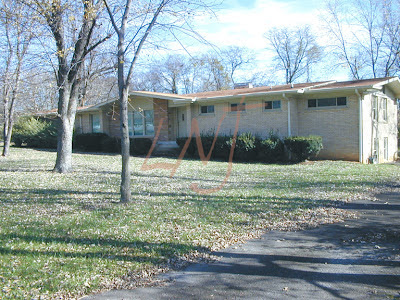 (Pictured above is the last house Jim lived in, at 400 Westchester Drive in Madison, Tenn. Please respect the privacy of the current owner and DO NOT intrude on the property or ring the doorbell).

The final couple of years of his life, Jim had offices in the basement of the home. He also used part of the space for a small recording studio, where he would rehearse with the Blue Boys and experiment with song ideas.

A few years ago I asked Jim's secretary, Joyce Grey Jackson, to draw a sketch of the layout of the lower level of the home, which she did. Ray Baker looked at it and said it was fairly accurate but it is not necessarily proportional. Also, Joyce failed to draw in the stairway which would have been in the approximate middle of her rendering, and which led down from upstairs. (Click on the image to enlarge it).

There was initially only a driveway on the north side of the home (on the left as you looked at it, as the house faced west). This driveway led to a small parking area. Oddly enough, the Reeveses only had a car port without a door on it. It must have been a real challenge to access it because this necessitated going down the driveway and then making a sharp, hairpin turn to the right, backing up at least once, and then aiming for the carport! Very odd design. Eventually they added a driveway on the south side of the home (on the right as you look at it), which led down to the door through which you entered into their basement office. Ray Baker tells the story of the time Jim handed him a shovel and told him to go out and do something about the ruts Ray's car had created in the (then-unpaved) muddy driveway one wet day! Ray didn't like that very much.

Here is a rare color photo of Dean Manuel at the organ and Bunky Keels (who was briefly a Blue Boy before and after Jim died), rehearsing in Jim's basement. Notice behind them is the window of Jim's control room, next to a door leading into that room. On the far left (out of the frame of the pic), is where the pink piano stood as shown in Joyce's drawing. (You can see the chair). The triangular pattern on the wall was actually raised diamond-shaped soundproofing similar to what Jim had seen at the Starday studio. On the far right (out of the picture), was the bomb shelter that Jim and Mary had installed in 1962. Remember, this was in the era of Cold War tensions between the U.S. and the Soviet Union, and in my book I describe how Jim's Christmas album was recorded during the Cuban missile crisis. Incidentally, on the wall is the sombrero that Jim tossed on top of his guitar when he sat down on the floor and posed for an informal pic. (See below). 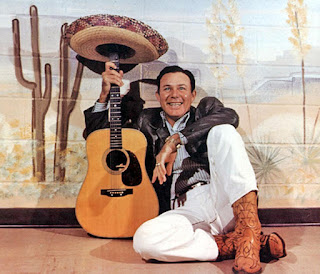 To enliven the basement area, which only had a few windows, (and was sometimes referred to pejoratively as "the dungeon"), Jim hired an artist to paint a southwest scene along the long wall and also in his control room. Later, after her husband was gone, Mary disassembled the control room. She took me downstairs one night and showed me the basement, but although it was thrilling to be there, I was disappointed that she had changed the appearance of the room.

In my book I go into more detail about the Reeves home, along with the dimensions of some of the rooms like the studio area. This is where Jim took Cindy Walker to listen to a demo he'd cut for her on "Distant Drums.


Sometimes the piano would be moved across the room, such as in the photo of Jim below. On the right in the photo (where you see the knotty pine wall) is where the staircase landed. Out of the frame on the right was another door which lead into the office area of the basement. Note the RCA mascot, Nipper, in the photo, and some of Jim's albums on display above his head. Also shown here is a pic before Jim and Mary finished the basement and you can see the louvered door that Jim was sitting in front of. By the way, the color pic was shot from the area where Jim's control room was, and looks toward the stairs in the middle of the pic. 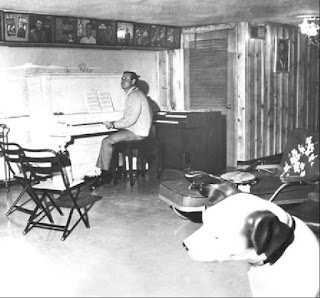 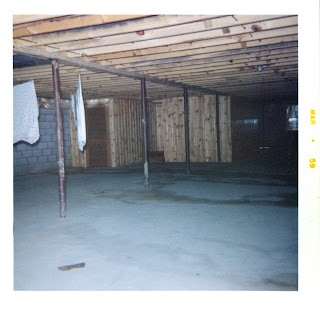 Jim Reeves was an avid hunter and he especially enjoyed deer hunting. It's hard for me as a non-hunter to understand what the thrill is of killing an innocent animal, so I admit I can't relate to Jim's passion. And "passion" is the right word for it, because he had mounted deer heads all around his home! I can't imagine most women wanting to live amongst such a garish display, but Mary used to go deer hunting with her husband. In this collage, Jim posed next to deer heads in his office, and the pic on the right shows him walking from the office area of his basement into the rehearsal/studio area. As if that wasn't enough, he also had a deer head upstairs hanging above his fireplace mantle in the family room. 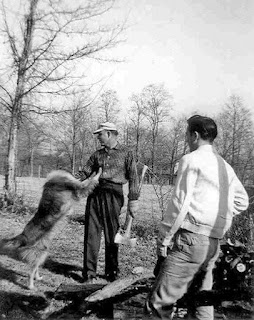 Clearly, Jim enjoyed his home but he didn't spend a lot of time there. Although he said in various interviews that he toured about 100 days a year on the road, in my book I document virtually day by day what he was doing, and it is clear he worked a lot harder than that. In fact, there was a five month period when he was home only one weekend! Even when he was not touring, he seldom stayed home. He went out night after night, or flew to California to see his ladyfriend Bea Terry (whose romance with Jim is revealed for the first time in my book), or he might fly to Texas with someone like Buddy Killen to go partying and/or see his mother, Beulah, to whom he was very devoted. So Mary Reeves was left alone a lot, except that if Jim was going to be gone more than about 3 weeks, either she would fly to see him or vice versa, regardless of where either of them was in the world. This surely is testimony to the fact that the two were close mates, and yet they also pursued relationships outside their marriage. Mary was a bit afraid to be home alone by herself and that's one reason they got a dog — a collie whom they named Cheyenne. They also installed a burglar alarm so Mary would feel safer. When he was home Jim would do various chores like chop wood for the fireplace. Here is a photo of Leo Jackson talking with Reeves as the singer is in his back yard working up a sweat. 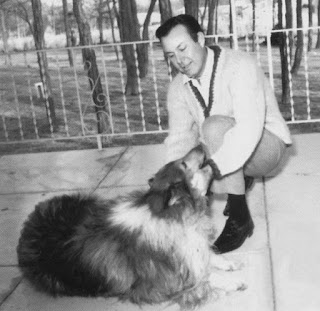 Jim's yard used to have a lot more trees (as can be seen in this photo of Jim with Cheyenne on the back porch), but a tornado in later years came through the area and destroyed a lot of them. Originally the Reeves home was located on a dead-end street, but then the street was extended. The area is still a pretty, park-like setting. Hank Snow used to live nearby, and ex-band member Tommy Hill shared a house a couple of doors down with songwriter Hank Cochran.

The back porch had a fireplace (on the other side of the one in the den). It was a large, covered area. His Irish friend Pat Campbell (from England) recalled visiting the Reeves home and talked in my book about how he and Jim sat on the porch one summer evening and watched the fireflies.