I had already released the demo on the last song Jim ever recorded, "I'm A Hit Again," (on the same CD that contained the symphony concert), but I then decided to overdub it. By happenstance, the man who now owns the former Reeves home in Madison, Tennessee — George Bradfute — is himself a record producer. So we assembled musicians in Jim's former basement studio, where the song had been born so many years before, and put new music behind it.

The tune had been co-written by Jim and Ray Baker, the latter of whom headed Jim's song publishing firms. After the release of this overdub (on the VoiceMasters CD, "I'm A Hit Again") Ray was so impressed with it, he introduced me to Steve Brink, who had worked for years in the music industry in the UK and headed H&H in England. Ray and Steve had a longtime business acquaintanceship and Mr. Baker thought Mr. Brink could help take the VoiceMasters music to a broader audience in the UK.

In tandem with my label, VoiceMasters, H&H released a 2 CD set called "I'm A Hit Again," which was enthusiastically received by Jim's fans, and that's putting it mildly. We also released the title track as a radio single, and it zoomed to #1 on the UK "Hot Disc" chart, where it remained for an astonishing seven weeks! ("Hot Disc"is a survey of radio stations throughout England, Ireland and Scotland, and is voted on by the stations themselves). Before the song left the charts, it got competition from another of my overdubs, "Distant Drums," which went as high as #3 in the UK on the same chart.

The overdubs were getting a lot of press across Europe, with newspapers, magazines, radio and even TV spotlighting them.

Steve and I were pleased that Ray Baker helped us promote "I'm A Hit Again," by doing a spate of media appearances. Here is a clip from a phone interview that was done with Ray by the BBC, in which Ray talks about the origins of the song, and also gives some insights into Jim Reeves. I had to laugh when I heard the interviewer characterize Jim's life story as not possessing any dramatic elements. How wrong he was! If you read my book you'll find out otherwise! Aside from talking about the music, Ray was drawn into a discussion of the last time he saw his boss, and then the sad aftermath of the plane crash. It's a gripping interview, excerpted below.

Incidentally, I also thought you might like to read an old article dating back to late 1962 when Ray Baker joined the staff of Jim Reeves Enterprises. Click below to enlarge the clipping. 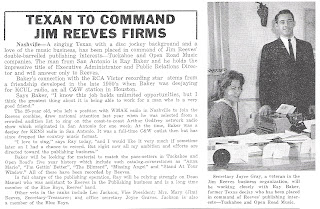 My UK business partner, Steve Brink, has likewise made some media appearances promoting the CDs and DVD that have been released  based on the VoiceMasters tracks. Below is an excerpt from a show hosted by Susan McCann, on which Steve guested. Susan has been dubbed "The First Lady of Country Music" in Ireland. She has had gold records and performed for world statesmen in France, South Africa, Russia, Switzerland and the U.S.

Susan made the acquaintance of Blue Boy Bobby Dyson and shares an anecdote that Bobby told her about Jim Reeves which I think you will find fascinating.

And there have been television ads to promote all this new music and video that we've released. See below.


There are many press clippings from around the world that focus on the music I've produced, and I may post more in the future, but in the meantime here are a few that show how enthusiastically Jim Reeves' new music is being received. (I wonder if the Reeves estate heirs will thank me for boosting Jim's image, marketability, and airplay internationally — which puts money in their pockets? Don't bet on it.) Click on the image and it will enlarge so you can read it. 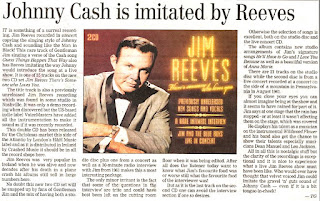 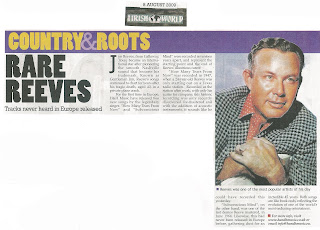 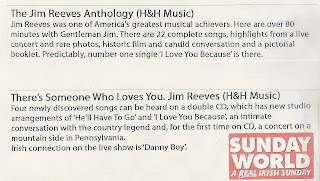 This is just a small sampling of the worldwide press that has been generated on these releases. I may post more in the future.