Those who have read my new book on Jim Reeves know that one of the most stunning revelations is that Jim carried on a long-term affair with a Hollywood publicist by the name of Bea Terry. In fact, the romance between the two of them is the subtext of the book. I detail their relationship from around 1953 on, with many quotes from Bea telling scores of intriguing anecdotes about their time together. 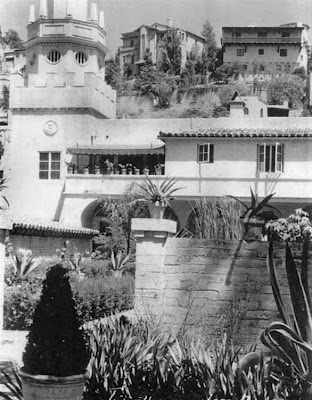 Bea prevailed upon Reeves to change his singing style from that of a raucus hillbilly to an intimate crooner (I tell you how this came about), helped choose his songs, restyled his appearance, got him booked on radio and TV shows, got him selected as the lone country performed on a 1954-55 U.S.O. tour over the holidays to Europe, sung his praises to RCA and likewise the Grand Ole Opry, and gave Jim a shoulder to cry on.

Ms. Terry lived in Hollywood at a place called Roman Gardens (which I describe in my book). Here is a photo of what became a "lover's hideaway" for Bea and Jim. (The white building in the center with a Shakespearean turret and tiled roof is the apartment complex). From the street it was hard to see as there was lush California vegetation in front of it.


She was born Lola Bernice Terry in Texas, but after getting a divorce when she was a young woman, moved to California at the urging of cowboy star Jimmy Wakely. A commercial artist by training, on the West Coast, Bea became a successful publicist for a long list of stars. Over the years she was called upon to serve as hostess at various star-studded functions. She held a big bash for Lawrence Welk and Duke Ellington. Music luminaries like David Rose, Lionel Hampton, Nelson Riddle, Les Brown, Stan Kenton, Spike Jones, Ray Anthony, Frank Devol, Earl "Fatha" Hines, Paul Weston, Ernie Freeman, Russ Morgan, Artie Shaw, Red Nichols, Nat King Cole, Benny Goodman and many more attended her parties.

Bea Terry was the hostess at a party given by MGM honoring Hank Williams the month before he died. She was instrumental in bringing Hank Snow from Canada and launching his career in the U.S. (Mr. Snow wrote her letters crediting her with this). She did other work for Hank Thompson, Rusty Draper, Johnny Bond, Sue Thompson, Tommy Sands, Pee Wee King, Eddie Dean, Wade Ray, Bonnie Guitar, Ned Miller, Al Martino, and of course our own Jim Reeves. Bea held a big celebration honoring Reeves for being named Country and Western Artist of the Year.

The photo below confirms her clout. This shows a luncheon which Ms. Terry hosted at the shop of famed Western tailor Nudie Cohn at which his important clientele, including cowboy actors/singers, were present. Look at the "who's who" in this picture! You should be able to spot stars like Gene Autry, Roy Rogers, Rex Allen, Tex Ritter, Pat Butrum and more. Bea is wearing glasses and is seated next to Nudie on the far left. How many other stars can you name?

Here is a shot of Bea in front of the fireplace, going over a publicity campaign with one of her handsomest clients, the actor Hugh O'Brien. Even though she fraternized with some of the biggest stars and movie moguls in Hollywood, Bea was in love with Jim Reeves.

In addition to all this, Ms.Terry was the editor-in-chief of Deejay magazine, served in editorial capacities for Southern Farmer, Country and Western Jamboree, Downbeat, TV Time, Country Song Roundup, and wrote a monthly publication (a precursor to today's blogs) called "Bea Sez-Del Sez" with Del Roy. Bea was a music publisher, song writer, radio program scheduler, and production coordinator on TV.

Bea could look like the bookworm type — sort of the librarian who, when she takes off her glasses and lets her hair down — becomes a real beauty. A short but very buxom woman of many talents, Bea stood out from the crowd of Jim's other women. And according to the evidence I scrutinized — which was substantial — Reeves talked repeatedly about leaving his wife, Mary, for "the other woman." But Ms. Terry talked him out of it. (In my book I tell you why).

The contrast between Bea Terry and Mary Reeves was striking. Bea had to work for a living; Mary did not. Bea was an excellent cook (they say "the way to a man's heart is through his stomach") and in her later years she even wrote the "South Fork Ranch Cookbook," which was based on the "Dallas" TV show. She also enjoyed dress designing, sewing, interior decorating (including doing her own upholstering, making slip covers, drapes and curtains), oil painting and other art projects, was a crossword puzzle devotee, as a wordsmith loved Scrabble, and shared Jim Reeves' interest in the psychic! She was an amazing woman...

Reflecting on her long-term relationship with singer Reeves, Bea Terry reflected, “It was Jim Reeves who gave me something no other man ever gave me... I was really loved and I really knew it. So did others. So did Jim. I’m also grateful. For a long time he filled a void in my life and left indelible memories...I twas one hell of a ride Jim took me on. You just can't imagine. I wouldn't trade that for all Mary Reeves has made off his voice since he died.

“Most of that ride was sweetness personified. Some parts of it were hectic, some very perplexing, and some even scary. I have wondered what my life would have been like had I never met Jim and what his life would have been like without me. I will always wonder about such things — like so many other things I wonder about Jim, who was really an enigma...

“I have been as protective of Jim in death as I was with him in life. After his untimely passing, a person called me from what I call a ‘scandal’ magazine. I was propositioned to write an unsavory story about Jim (true or not) using a fictitious name as a byline. I was offered $25,000 to do so. But if the man had been face to face with me I would have hit him over his head with a chair or any other thing that was at hand. Not for a second did I consider taking his offer and although I could really have used the money (always overworked and underpaid), not for a moment have I regretted not taking it. yes, I could have profited from Jim’s death (not only from this, but in other ways). But I did not. It was unthinkable!”