I am pleased to announce the debut of a wonderful new 8 CD set commemorating the 50th anniversary year of Jim's passing. “THE GREAT JIM REEVES” has 170 tracks (including 92 overdubs). Even if you have bought every VoiceMasters and/or H&H release before, this set still offers 42 NEW overdubs of RCA masters you have never heard before. Reeves' magnificent voice has been isolated from the original backings, remastered for greater clarity, then combined with tasteful new accompaniment, including by current members of the Grand Ole Opry band! It sounds like Jim just recorded these today! I also wrote an exclusive 48-page (almost 18,000-word!) booklet (with my daughter Sara) about the “Songs & Recordings.” It features notes on each song plus rare photos that have never appeared anywhere before. It comes in a beautiful, silver-trimmed case with each of the CDs organized according to theme (Early Days, Gospel, Nashville Sound, Pop, Christmas, etc.) You get all this for only $49.95. Just go to www.jim-reeves.com! 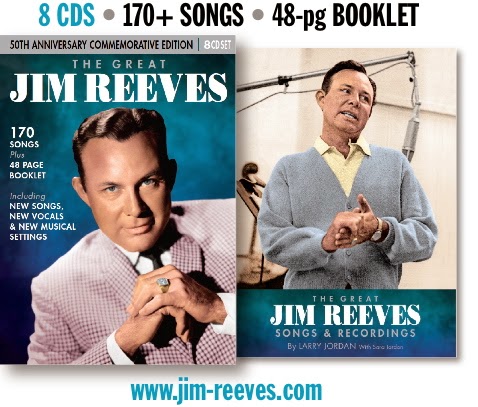 Posted by LARRY JORDAN at 3:39 PM No comments: