I was born in a log cabin and walked five miles to school. Oh wait a minute. That's not me! That's some guy that became President. Let's see...how can I make this story interesting? 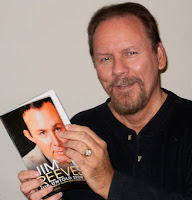 Well, I was born in Cedar Rapids, Iowa and grew up as a child of the 1950s. My dad was a bus driver and my mom was an ex-school teacher and homemaker. I can't remember when I first heard Jim Reeves but I know he was a favorite of our family. My father even went out and bought an expensive radio so we could pick up the Grand Ole Opry on WSM. I was always interested in music, and benefitted from a wonderful education at Taylor Elementary, where my music teacher, Ruth Carlson, not only recruited me to sing in a chorus, but organized car pools (before they were fashionable) to take us to see local productions of live theater and musicals.

One day my fourth grade class was ushered into the gymnasium and shown a variety of instruments. We were encouraged to select one that appealed to us and sign up for lessons. That night when I announced to my mother that I wanted to play the violin, she looked at me skeptically. But when my dad got home from work and learned of my desire, he pointed out to my mom and me that he had six uncles who played the fiddle and were part of a traveling band that toured Nebraska, Iowa, Kansas and Missouri! So I guess my fascination with the violin was genetic. 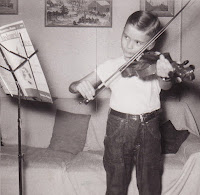 I was a bit of a child prodigy such that only weeks after starting to take violin lessons from an incredible teacher named James Welch, I won a citywide music contest for my grade playing Brahm's Hungarian Dance #6. My parents were enormously proud of me, of course, and insisted I get out my violin and play for friends and family who visited our home! This photo was taken in October 1961 when I was 9 years old. That autumn is when Jim Reeves was recording "When Two Worlds Collide," "Blue Side of Lonesome," "A Fallen Star," "A Railroad Bum" and "I Won't Forget You" — songs that seem as fresh to me today as if they were just recorded, and yet they harken back to a time long ago when I was just a kid. It's hard to believe so much time has passed.

My other interest when I was growing up was writing. I used to read a children's newsletter that was printed on the back of the Rice Chex cereal box, and from that got the desire to put out my own little paper. Although around this time my mother took a typing class in night school, I taught myself how to type on her old manual Royal typewriter. After getting a small printing set for Christmas when I was 11, I began publishing a little neighborhood newspaper, which I ran off on a mimeograph machine at my church. This evolved to the point where, when I was 15, I launched a citywide tabloid that was printed by a commercial printer and grew to become the largest selling non-daily paper in Iowa. How I did this while still in school, I don't know. I published it for five years, attracting national attention, including a two-page spread in Editor & Publisher magazine. I was a bit of a muckraker, and absolutely fearless because as a minor I couldn't be sued. So I waded into controversial subjects and local media even picked up my stories. One of my articles on schools prompted a statewide meeting. I believe from this experience grew my lifelong desire to share what I learn, to express myself publicly and try to make a difference in people's lives.

As I explain in the Foreword to my new book, "Jim Reeves: His Untold Story," when I was 13 I wrote a letter to Mary Reeves. She replied three days before my father died, and after I wrote her to tell her I was glad he lived long enough to have read her letter, it must have touched her heart. Because we became friends for 33 years...until her death in 1999.

When I was 21, I became the youngest member of the administrative staff at a newly opened community college and, as a technical grants writer, helped bring in over $4 million to fund the school. I next worked in politics, becoming an issues strategist and speechwriter in three Congressional campaigns. I then launched a monthly tabloid magazine that was distributed free to 50,000 households, after which I moved to Florida to enjoy the good life for about 5-1/2 years, doing freelance writing and working on my tan! Eventually I decided I had to Get A Real Job, so I returned to Iowa. Soon thereafter I met my wife, Julie, at a political function. We were married 23 years ago this May. 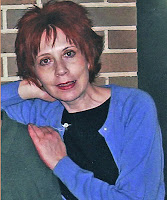 I honestly didn't realize when I married her that Julie was so great at sales, but when we launched a glossy regional magazine, Midwest Today, she assumed responsibility for all the advertising. Julie is definitely a "people person" who immensely enjoys interacting with others and is very much customer-oriented. People love her! She has built up a list of prestigious advertisers, many of whom have been with us for years. In fact, 2012 will mark the 20th anniversary of our publication, which — besides being available by subscription — is also placed directly in the rooms of numerous upscale hotels/motels. In addition, we have an "exact replica" Digital Edition that uses state-of-the-art "page flip" technology to enable our website visitors to read our entire issues just like they were holding a printed copy in their hands. And for more than 14 years, I have produced a weekly radio show that's based on the contents of our issues, and airs on 52 stations, reaching a multitude of listeners across ten states.

Nearly 22 years ago we were blessed with our daughter, Sara Elizabeth Jordan, who is one of the greatest human beings God ever created. (Do I sound biased?) She is a such a sweet, intelligent, thoughtful, earnest, honest, and ambitious young lady with a great sense of humor. She's also a heck of a writer. After seeing her dad struggle for about 13 years to get the new Jim Reeves book finished, she devoted the balance of her summer vacation from school to help edit the final layouts. She worked on it night and day. I wanted someone with no particular interest in Reeves to look at the book critically, and Sara brought a fresh perspective to the task. She is a voracious reader, especially of biographies, and is graduating with honors this Spring from a prestigious University, with a degree in American Studies and a minor in history. Articles she has written for our magazine have generated national attention. One of her pieces is even going in a new book on Karen Carpenter, and a second article is being cited in a new book on the Kennedy assassination. (The pic of Sara with Bill Clinton was taken not long ago when he flew to Des Moines to attend the funeral of my brother in law, Sara's uncle. Former President Clinton is a family friend, as is Secretary of State Hillary Clinton).

On a sad note, many of you who have come in contact with me may know that for 9-1/2 years I took care of my dear Mother, Olga, who suffered from Alzheimer's. The worst day of my life was Oct. 16, 2008 when I lost her. I have never known anyone who more fully embodied the true Christian virtues as my Mom, who was selfless, generous, intelligent, nurturing, absolutely dependable, and had such a kind heart. Even after the progression of her illness made communication more difficult, right up to the end she was giving me hugs and kisses and holding my hand. Her courage was inspirational, as were so many other aspects of her life. Since I provided hands-on care of my Mother 24/7 in my home, I kept a detailed, daily diary which reflected the gamut of the experience. I also learned a lot that I would like to pass along to other caregivers. It is my hope that I am able to finish a book I've started to help others whose loved ones are afflicted with this devastating illness.

So there you have it. Oh — I almost forgot. I also have produced a series of CDs and a DVD that feature previously unreleased new songs and video performances by Jim Reeves. (Read more about that here.)