UPDATE: SO MANY FANS HAVE WANTED TO TAKE ADVANTAGE OF THIS SPECIAL OFFER that even though it was initially only available during last Christmas, it has been extended now for Spring 2016, so you can still get all 4 of these CDs at a special price and SAVE MONEY.

2015 was a banner year for Jim Reeves fans, with the release of 4 CDs, each of which contains previously unissued tracks by Jim! On "Jim Reeves and Friends Live From Nashville,” hear Jim call a square dance, host his friends on the Grand Ole Opry (including performances by Chet Atkins, Patsy Cline, the Everly Bros., Janis Martin, Del Wood, Stringbean, and a duet Jim sings with June Carter). There are 34 tracks, and 23 Jim Reeves songs (only 1 of which has ever been released)!

On “Jim Reeves : The New Gospel Recordings,” there are 34 tracks, including many in new musical settings, with 12 tracks never before released. Hear beautiful new overdubs of Jim’s beloved sacred songs, played by current members of the Opry band, top Nashville musicians, plus pros from Europe. The sound quality on Jim's voice is truly stunning; rich and clear like never before. Also hear studio chatter, false starts, countdowns and Jim giving instructions to the Anita Kerr singers and demonstrating a capella how he wants them to sing!

With “The Best of Jim Reeves Live In Concert” you get 28 tracks, spanning 5 years, 6 different venues (ranging from nightclubs to outdoor performances to Europe), and 3 different sets of Blue Boys — including musicians you’ve never heard Reeves perform with before. For the first time ever, also hear Jim in a comedy routine with the Lump Lump Boys (the Blue Boys dressed up as hillbillies)!

And on “Jim Reeves Rare and Unreleased,” there are 31 tracks, 21 NEW overdubs, and a highlight is that Jim sings back-up to Blue Boy Bobby Dyson on a new song you've never heard him sing before: “Thanks For Calling.”

You get 127 tracks on 4 CDs for a SPECIAL DISCOUNT of only $49.95. That's just 39 cents per track...far less than what you'd pay on iTunes! HERE IS THE LINK TO LISTEN TO SAMPLES AND ORDER THE CDs. CLICK HERE 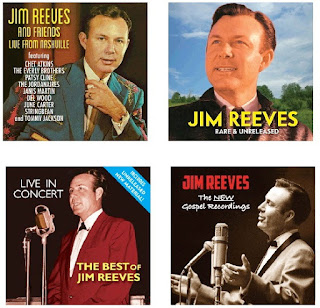 Posted by LARRY JORDAN at 12:00 PM No comments: