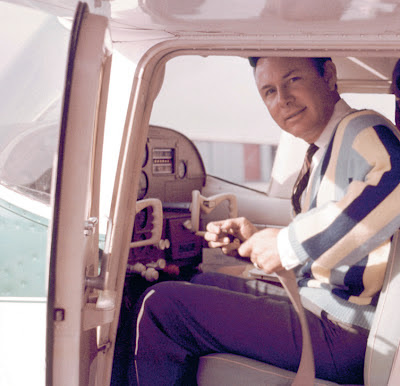 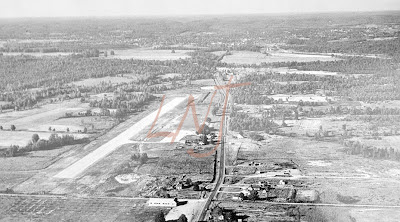 (Jim Reeves and Dean Manuel took off from the Batesville airport on the afternoon of Friday, July 31, 1964 for their ill-fated trip home to Nashville. The airport at that time consisted of a runway with a nearby general store that served as the spot where pilots could refuel their planes. This can be seen in the center of the photo near where the radio tower is located. Photo copyright Batesville Guard).

WORLD EXCLUSIVE! The historic video you are about to view is very rare. Its existence was not even known by more than a tiny handful of people, until I acquired it, and it has never been made publicly available until now. It shows the scene of the plane crash that killed country music singer Jim Reeves and his piano player, Dean Manuel, on the outskirts of Nashville on the afternoon of July 31, 1964. This home movie (which is even more rare because it was shot in color), was made on Sunday, August 2, 1964 by a bus driver for one of Jim's Grand Ole Opry colleagues, shortly after the crash location was broadcast on local radio stations. 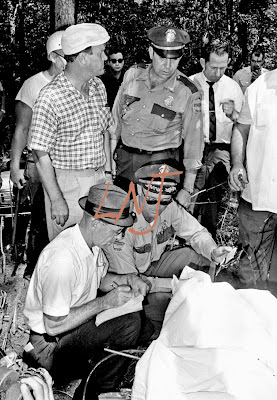 In my new 672 page book called "Jim Reeves: His Untold Story," I devote two entire chapters to the events leading up to the crash and its aftermath. Following more than 13 years of exhaustive and painstaking research, including scores of interviews I did with experts and even eyewitnesses to the accident who were never questioned by authorities, I am able to offer a gripping, minute-by-minute account of what transpired. I relied on forensic evidence, information gleaned from the long-lost accident report, as well as new details given to me by the Air Traffic Controller who was the last to speak with Jim by radio. I unearthed handwritten notes made at the airport that day, and had the hands-on assistance of one of Jim's charter pilots, Bill Larson, who had flown the same plane — a Beechcraft Debonair — only the day before. (He was also the first to get airborne after a search was launched). I reveal the identity of the woman who spearheaded the search efforts (who was the wife of a well known country music singer), and I tracked down the military man who is credited with finding the wreckage. I also explore some intriguing mysteries, including why for two days authorities misdirected over 2000 ground and air searchers to another area entirely, even though airport officials knew from the moment the plane disappeared from Nashville radar precisely where it could be found. Then there is also the matter of the frantic search for an important briefcase that Jim had with him, and the fact that the FBI entered the investigation. And I candidly discuss the inadequacies of the crash probe.

I also reveal how, according to two of Jim's charter pilots who flew with him, Jim Reeves managed to get a pilot's license before he was ready to fly.


(In this unpublished photo above, the FAA's John Hornaday takes notes about Jim's wallet as Eddy Arnold stands nearby. It was incorrectly reported that Eddy identified the body, but he did not).

PLEASE NOTE that due to the grisly nature of the original video, I am only posting carefully edited excerpts, so as to not show any of the human remains. Since so many of Jim's fans around the world have been so interested in the crash all these years, I wanted to give them a chance to comprehend the scope of the devastation at the scene.

The video begins with a friend of the photographer driving down the rural roads looking for the plane crash. Then you see cars parked along Franklin Road, the north/south highway that Jim flew over just before he crashed. At 1:14 into the video, you see a man in blue shirt with baseball cap and sun glasses. That is songwriter John D. Loundermilk, a friend of Jim's. At 1:30 the short man in plaid shirt and sunglasses, who turns around, is Charlie Lamb. 1:34 looks to the west. Spectators (not visible) are just beyond this, lined up peering east into the woods. 1:39 is the view looking south toward "the tree", at the base of which the plane crashed in a steep, nose-down attitude during an intense, though brief thunderstorm. 1:50 looks across a brushy clearing toward the north. 1:54 has the camera man pointing east. Around 2:01 you briefly catch a glimpse of Eddy Arnold in blue shirt and light-colored cap as he turns around and walks south past the wreckage. At 2:17 you see men standing near where Jim's remains were found just beyond some branches and a big portion of wreckage (the underside and front part of the plane). 2:30 is a close-up of the engine (which was deposited right-side up just southwest of the tree). Around 2:46 the camera man (who is standing west of the tree) pans to the northeast. At 2:50 you see police searching the woods south of the wreckage. At 3:07 a local TV reporter interviews John Hornaday of the FAA, as both men mindlessly stand amidst the carnage. Around 3:16 an investigator lifts part of a wing to retrieve items from Reeves' wallet. At 3:35 you briefly see a search helicopter overhead piloted by Tennessee State Trooper Truman Clark, with his passenger Bill Larson. 3:43 shows one of Jim's boots. 3:50 the stretcher with Reeves' remains is taken away. Afterward you see part of the crowd that assembled at the crash scene; parents brought children, all dressed in their Sunday finest, after having attended church. You then see cars lined up along Franklin Road, as the camera pans around and you also catch a glimpse of the high voltage power towers. (The plane crashed just south of this). The police car is exiting Baxter Lane.

To view the video full screen, click on the little YouTube logo when the movie starts to play.

UPDATE MAY 14, 2016:
There is a very sad and ironic update to this story. The young man in the cowboy hat you see driving in the video, looking for Jim's plane wreckage in 1964, was Johnny Seay. I am saddened to report that he was killed this afternoon also in a plane crash! He loved music, being a cowboy, songwriting and performing...but flying was his favorite thing to do. Unfortunately, he struck a wire near a cell phone tower and his crop dusting plane crashed. It is so unbelievable that 52 years after he helped search for the Reeves wreckage, Johnny himself ended up meeting a similar fate. I had not known that Mr. Seay was also a talented performer, and I want to share with you one of several songs he recorded that made the charts. God rest his soul...