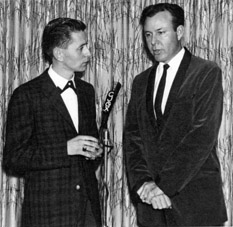 Canadian radio veteran Lorne Harasen was a friend of Jim Reeves (see photo), who also wrote the liner notes for the "Good 'N' Country" LP that was released in early 1964 on the RCA Camden label. (It's one of the best albums Jim ever recorded.) I interviewed Lorne for my book, "Jim Reeves: His Untold Story," and he interviewed me for a special one-hour program he recently hosted, broadcast on CKRM in Regina, Saskatchewan, Canada. The station's signal also covers part of the Dakotas and Montana in the U.S. I was very flattered to be given such a spotlight, and also intrigued to hear Lorne's observations about Jim Reeves. I've divided up the interview into four parts for easier download. Just be sure to click each audio clip in chronological order, 1 through 4, to make sense of the program.