In my book, "Jim Reeves: His Untold Story," I tell about how Jim bought a 1960 Cadillac Eldorado (with money he earned from the 3 million-selling "He'll Have To Go"), and went down to Georgia to pick it up. As you may know, this car was subsequently acquired by the world's foremost collector of Reeves memorabilia in California, who proceeded to have it completely restored for over $100,000 by probably the finest restoration expert on the West Coast. This was not merely a matter of putting new parts on an old car. Instead, the old parts were restored to like-new condition. Except for things like upholstery which had to be custom-created at great expense to match the original. 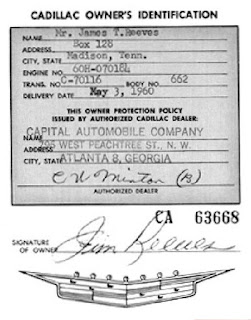 Although we've had photos of the restoration on our website (www.jim-reeves.com) for some time now, I thought perhaps you might like to see a video shot of the car by the restoration expert himself.

The first time I ever visited Mary Reeves in Nashville back in 1968, just before I turned 16, she picked me up in Jim's Caddy and chauffeured me around town. She commented that she had just gotten the car back from the repair shop, and had hurried to do so because she knew how much I'd enjoy riding in Jim's car. I was in the automobile on various occasions over the years. One funny story concerns the fact that we had been at Mary's office in the new RCA building one Sunday afternoon when I went out to the car to retrieve something. Unfortunately, the outside door at the rear of the building locked behind me and I couldn't get back in! I decided to honk the horn but Mary didn't hear me because the building — being a recording studio — is so soundproof. Finally, Mary started to wonder where I'd gone, and I can still recall standing on the back steps peering through the window in the door, and seeing Mary come down the stairs, spot me, and throw her head back and laugh uproariously at my dilemma as she walked to the door to let me in!

I also will never forget the time she parked the car and we sat looking over the Nashville skyline and she ruminated about how she wished she had the money to start a bigger record label (than Shannon), so as to give worthy and aspiring artists an opportunity to showcase their talent.

By the time the Jim Reeves estate was liquidated the car was in pitiful shape, having sustained various dents and dings over the years, as well as other neglect. It took over two years for the vehicle to be lovingly and carefully restored to its like-new grandeur.

This was a very extensive and expensive project, far more so than anyone would imagine. In talking with the owner of the car, who is my best friend (but who likes to keep a low profile), he pointed out just the problem of re-doing the seats. "This car was different in a lot of ways," he explained. "Normally the Eldorado Cadillac came with all leather (seats), but [back in those days] you thought that the leather would wrinkle your clothing, so [Jim Reeves] ordered that special with a cloth insert [in the seats]" However, after so many years, the upholstery in the car was in poor condition, so this posed a challenge to replace. Miraculously, the restorer found "an original bolt of green leather, factory issue, in a warehouse somewhere and I paid dearly for it. But even if we had found an original bolt of cloth, it would have rotted over the years. Leather lasts forever, but cloth won't. So the interior of the car was disassembled and we shipped boxes of the material off in a crate to Hill Jenkins in North Carolina, because he is the top expert on interiors for old Cadillacs in the country. He took a sample of the cloth out from under the seat, where the sun had never bleached it, and he went to one of the mills down there, and he had them duplicate the pattern. That's why when you start rebuilding a car like that, you spend a hundred thousand dollars" (just on the restoration).

The following video will show you the interior of the car and you can see how grand the seats look. Also notice the color of the exterior, which is quite unique. Cadillac never used that Carrera green on another model year. The link below will take you to a new 48-minute documentary on Jim and the car.

I hope you enjoy the video of Jim Reeves' Eldorado!